skip to main | skip to sidebar

Not that bad after all...

Here is the story of "how things went for us"

On Thursday morning, the sub was working great but we were still unable to complete all the stations.
Here is a description of each stations:

1st : find and pass through a submerged gate
2nd : find 2 flashing buoy, dock them to release them
3rd : find a pipeline on the floor, follow it
4th : find a bin near the pipeline, center on it and drop a marker on its center
5th : locate a treasure identified by an acoustic beacon, to grab it and to surface with it INSIDE the recovery zone.

We have been working hard night and day on thursday, friday and saturday to finally qualify on sunday morning. Before the qualif, we were able to pass the gate, release the buoy, follow the pipeline, center on the bin, drop 2 markers in the bin and to go get the treasure to surface. But during the qualif, while the submarine was going to get the treasure, the vision system got a false positive and thought a treasure was located under the sub. The hydrophone system thought the sub was not over the acoustic beacon but the vision system has the last word :) The sub tried to grab that "not real treasure" and then surfaced a few feet away from the real recovery zone where was located the real treasure.

We decided to keep that run because we knew that with a run like that, we would qualify for the final run.

On sunday afternoon, for the final run, our hydrophone system was not working for an unknown reason. So we were unable to recover the treasure. We bumped the buoy again, followed the pipeline, went over the bin, and when the software triggered the marker droppers to drop markers in the bin, the PC died... So this final run gave us the 3rd place after University of Florida and University of Rhode Island.

Post mortem:
Dead PC: We don't know why the PC died but we think the marker droppers drawn to much current when they tried to drop at the same time... It's weird because the droppers are on a protected circuit... But according to the video recorded from the bottom onboard camera, the PC died while the sub was centered on the bin.
Hydrophone: We need to connect the ground of the hydrophone board to the water. We found out that this wire was broken. It's why the hydrophones stopped to work just before the final run.

It has been really fun to compete again and we are proud to bring back the 3rd place even if we were aiming the first place.
We learned a lot about how things can go wrong even when they have been working great for a long time. We also learned about how to work as a team and how to make the team work efficiently.

I don't have photos right now but we will put some on the SONIA's web site soon.
Posted by David at 11:07 AM No comments:

Yep, it's hard to admit but... SONIA team has been unable to drop a single marker inside the bin for the last 3 years:

2004: the solenoids got stuck after water infiltration. The logs indicated that the software sent the command to drop but nothing happened on the solenoids...

2006: a boolean variable was supposed to allow the submarine to drop after x confirmed reading of a centered bin. But, the timer was never registered... The submarine was able to follow the pipelines, to find the bin, to center on it but the command to drop was never sent...

2007: After 3 years, we finally dropped 2 markers in the bin during the qualif run ! I just can't believe it's finally happening :)

Time for an update

Hi everyone and sorry for the lacks of update for the pass few days. We've been very busy in the pool for numerous tests.

So here it goes. Since our hotel allows us to get in the pool at only 8pm we got a friend of our to lend us a pool so we can do our own test in the day. Basically we were able to test everything we had to except the pinger. We were able to dock with a light, follow pipes and drop in the center of a bin.

Last night though we encountered some problems. We weren't able to control our vehicle proprely. Our sub wasn't keeping its heading nor is depth. We putted in a very late nighter to fix the problem and we though we had. But then this morning at the SSC in San Diego, the pool competition, we came over the very same problem. We tunned our machine and two or three minutes after it was messed up again. After debugging and our old technical leader arrival, we finally found the bug.

With the bug being fixed, we had one of our best competition test day ever. We actually did all of the mission, set aside the X grabbing station. In other words, we docked a light, we dropped in a bin, we followed the pipes and we made surface over the pinger.

With almost every station done, we are now left to heavily test our states transitions and our X grabbing device. We should mount our X device tonight and test it over and over.

Tomorrow our current technical leader Tennesee Carmel-Veilleux will be doing the static judging and we should be in the pool to test our mission for Saturday, which is the preliminary day.

Later tonight, I'm going to try very hard to post some picture of our few days in San Diego.


Jonathan
Posted by Jonathan Ducharme at 3:26 PM No comments:

Our first day went very well put aside some little problems. First of all our flight from Montreal - Denver was delayed a bit, the result of this is that our luggage's didn't arrive at the same time as we did in San Diego. We also had one of our guy, François, that got search at the custom but then again without any major incident.

Now the big problem of the day was me losing my drivers license. I can't tell enough how bad this is especially when you were the one supposed to drive the team around for this year. Anyway with the help of Eric, one of our friend here, we managed to get a car. So again a great ending to something that could have been really worst.

Now for the fun part, we got the sub and it was in great shape. No damage at all in the transport from Burlington to San Diego. We also managed to test it a bit. It went great and we should do even more tests today and even try some parts of the mission.

Jonathan
Posted by Jonathan Ducharme at 7:51 AM No comments:

The day we take the plane to go to the competition is always a hard one. Not only because we don't sleep for the whole night but also because it's always complicated to go through the US customs with a AUV.

Here is the plan for the day:
* Meeting at the lab
* Go to the airport
* Have fun with the customs :)
* Get in the plane
* Connection at Denver
* Arrive to San Diego
* Go get the car
* Go get the room at the hotel
* Go get some food
* Go get the AUV
* Unpack everything
* Grab a beer
* Make sure there is nothing broken on the AUV
* Go to Home Depot to get some tools
* First pool test
* Get ready for tomorrow
* Go to bed... Yay !

Yes, I went to Burlington VT today to ship our robot... That means that we're off on the weekend.

So we'll pass time with our family, girlfriend and bed for the weekend. We have to get up very early on Monday so we can catch our plane for San Diego. Hopefully we're going to be in great shape for the upcoming week of competition!

Tonight three of our team members put in an all nighter so they could code and integrate some new stuff to the sub. Hopefully they won't pass out today since we need all of them to be at their very best for a big test day.

So a big thank to Martin, Binh and Simon for their late and ongoing work. 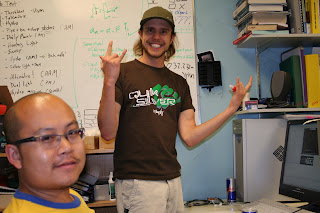 Welcome to the new SONIA blog

This blog will be used to keep everyone updated on the challenges, results and adventures we are going to encounter in San Diego during the competition. We will try to post as many entries as we can and try to keep up with our progress and adventures.

Please feel free to add comments and we wish everyone a good time on our blog.

The SONIA AUV Team is a project from the École de technologie supérieur. We are about 20 volunteers under grads students in Electrical, Industrial Production, IT, Mechanical and Software engineering. Our goal is to build a small autonomous underwater robot to go compete in the AUVSI & ONR annual competition.

For more information about us go visit our website.